One of the most difficult and demanding tasks for a network administrator is keeping an eye on your network and monitoring its health, watching bandwidth usage, finding and identifying problems, and so many other such tasks that require you constantly running around, checking on your equipment and watching multiple monitoring applications.

On top of that, you also have to keep track of reports and statistics for future reference.

Many tools exist that help you take care of some of these individual tasks, such as bandwidth monitoring, device detection, or network device health monitoring.

With Network Performance Monitor 12 from SolarWinds, you no longer have to keep up with multiple different software, nor the subscription and licensing fees that come with them, which, when added up, can cost a considerable amount of money.

Network Performance Monitor 12, one of our favorite comprehensive network monitoring applications, has the network monitoring capabilities that revolutionize the way network admins and techs can visualize, monitor, troubleshoot, and map their networks.

All your network performance data is visualized in an easy-to-read layout, and is customizable to fit your needs and your network’s specific topology and nuances.

In a traditional admin setting, network device discovery and topology mapping is time consuming and cumbersome, requiring many hours of tedious work and data keeping using different software and lots of legwork.

It also uses SNMP to automatically map your network’s topology, and then uses this information to poll your devices to obtain fault, availability, and performance metrics.

Monitoring the health of every single one of your SNMP-enabled devices has never been easier.

Keeping on the topic of network mapping, a constant headache for techs and admins is constantly keeping track of the endless changes to their networks, whether they involve device replacements, additions, or adding entirely new network sections. SolarWind’s Network Performance Monitor can help this headache go away by automatically keeping track of these changes, recording them for you, and creating maps as well as metrics graphs.

We have found that it can even automatically discover L2/L3 connections between devices, and its latest release keeps up with constant changes even better.

Its visualization software allows you to see link utilization, a very helpful tool when deciding which parts of your network need more devices, and which parts can make do with fewer or less sophisticated and less expensive devices.

Knowing which parts of your network do not need the best and most expensive devices can help cut down on costs and lets you appropriate the best equipment for each part of your network.

While we have traditionally depended on hard-wired workstations, servers, and their associated wiring devices, we are seeing a rapid move towards hybrid wired/wireless networks.

Wireless network devices add an extra layer upon your existing wired network, and the number of devices on your network grows quickly.

This includes not only personal wireless devices, but also the access points, switches, access point controllers, and extra routers to handle the load.

With Network Performance Monitor, mapping both your wired networks and your wireless networks, and visualizing the connections and the workings between them is simpler than ever.

With the explosion of cloud services, most networks are incorporating cloud services from various providers, such as using Google for email or Office 365 from Microsoft.

Keeping track of these services and their health is crucial to the productivity of your network users.

Now, alongside the ability to monitor your wired and wireless LAN, you can monitor your cloud connectivity and your hybrid environment.

NPM’s integrated NetPath software allows you to quickly identify outages, letting you see whom you have to contact to get the issue resolved.

You can also identify the more widely used services and use that information to direct traffic more efficiently to avoid bottlenecks and slowdowns.

With your wireless network comes extra traffic and a large number of extra devices, such as smartphones, tablets, and personal laptops.

NPM 12 allows you to be proactive in tracking these wireless clients and to detect problems, such as rogue access points or clients that are using a disproportionate amount of bandwidth, which can be indicative of malware.

Packet capture and analysis aid in helping to identify clients and users that are using more than their share of bandwidth, which can be indicative of malware.

As a network administrator, some of your main goals include network up-time, bandwidth balancing, and network security.

The discovery, mapping, and visualization that SolarWind’s Network Performance Monitor provides allows you a higher level of problem detection, troubleshooting, and resolution than ever before.

Quicker than ever before, too. NPM 12 features hop-by-hop analysis, hardware health monitoring, intelligent alerts, and performance and availability monitoring, among others.

These features are crucial to keeping a network healthy and running efficiently, and they allow you the ability to quickly respond to any potential problems before they become major issues that can take your network down.

Its drag-and-drop charts show you in real-time the status and health of you network, and it uses historical network statistical information to create baseline thresholds.

Performance metrics let you to identify problems, find ways to improve your network, and help you plan for network expansions and improvements.

With the release of Network Performance Monitor 12, SolarWinds has added hop-by-hop path analysis of on-site, cloud, or hybrid networks using the NetPath software.

Comprehensive monitoring of F5® BIG-IP® family products is now available, which lets you visualize your load-balancing environment and create graphic displays of the dependencies between component systems as well as detailed status data.

Minimum Hardware and System requirements are as follows (see http://www.solarwinds.com/network-performance-monitor#requirements for more info)

Supports all versions of the following Database Software, including SQL Express, SQL Standard and SQL Enterprise: 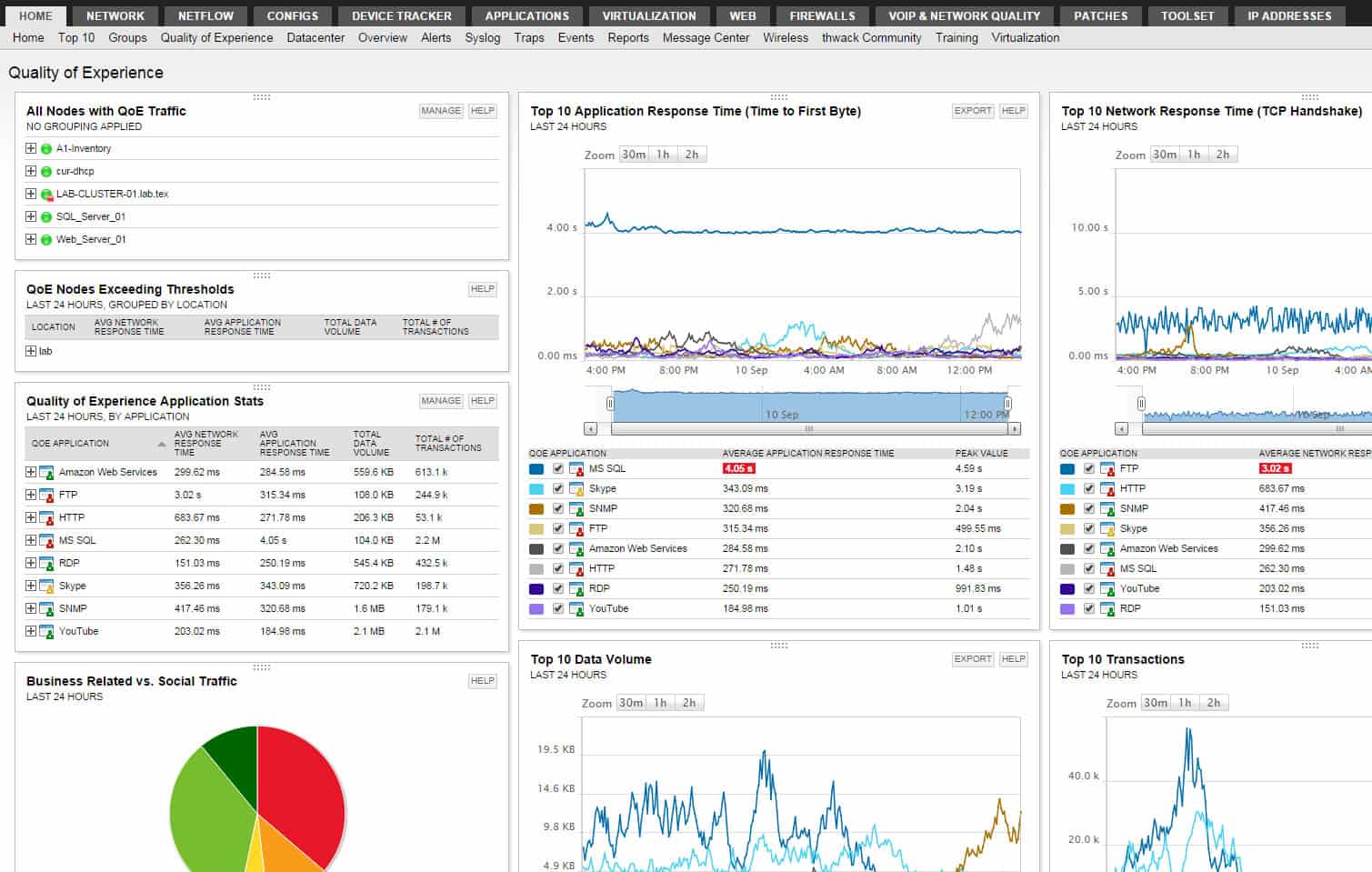 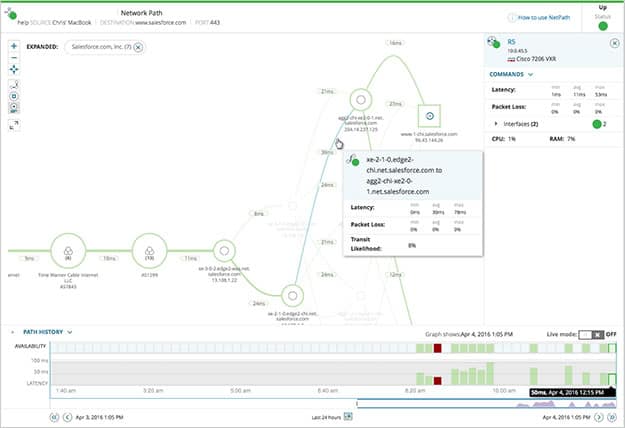 SolarWind’s Network Performance Monitor is an easy-to-install application and does not require any consultation or services to implement.

This out-of-the-box solution can be up and running within a couple hours, producing customizable reports, alerts, maps, and much more.