Firefox has enjoyed 25 million downloads in 99 days. We have been using Firefox here at NetAdminTools for the last couple of months, and are very impressed. For more info, see this article. We have to celebrate with a nice image from factorycity.net: 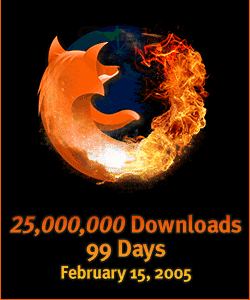 The popup blocker works well, and the rendering is beautiful, at least under Gentoo. Seriously, the rendering is much better on Gentoo than with IE on XP when you compile against updated X, fonts, etc. It takes a bit longer than IE to load up on Windows, since Windows already has so many components loaded and running as part of the OS; however, it is nice not to have to patch it every month for a major exploit. Also, by using Firefox, you will prevent the net from becoming a playground for proprietary “features” of one vendor. Check out the Firefox review on Forbes.com.