We picked up a Watchguard Firebox FB-10R from RE-PC (Tukwila) for 15 bucks. There is almost always some kind of auction on Ebay selling a Firebox FB-10. The motherboard on ours, it turns out, was damaged. Now the Firebox FB-10R is just a regular PC clone. It has three 3COM 3C509 NICs in it. We had to buy an AT power supply, since the power supply was removed. There were a bunch of boxes at RE-PC (there probably are some around today), but ours was one of the few that had the LEDs on the front. The LEDs are hooked up to the motherboards parallel printer port and are used to show traffic from the various interfaces. It isn’t that difficult to write data to the PC printer port with Linux. For a related article, see the parallel port routines at the end of the homebrew computer article on Coprolite. Now, the problem with the case on the FB-10 is that there is no way to put a video card in it easily. You can take the motherboard out and stick a video card in temporarily, but if you want to be able to access the BIOS without taking the motherboard out, you are out of luck. We happened to have an old ASUS SP97-V motherboard around. Now, the beautiful thing about this motherboard is that it has an AT supply plug, is a wee bit shorter than the stock Firebox MB, and it has a built in video card. We simply put the video interface in the same slot as the COM1 slot on the back of the firebox, mounted an IDE drive in the space above the floppy, drilled a hole in the back of the case for a keyboard, and we now have a cool firewall/router with three interfaces for our lab that runs Red Hat Linux swimmingly. Here is a picture of the SP97-V motherboard mounted in the case: 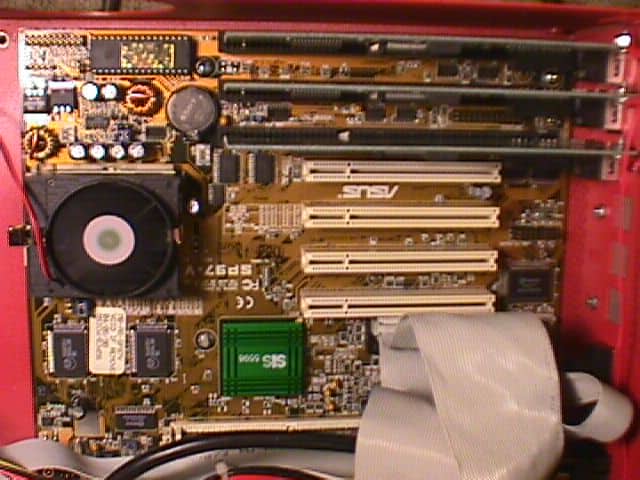 Here is a picture of the keyboard and video plug modifications: 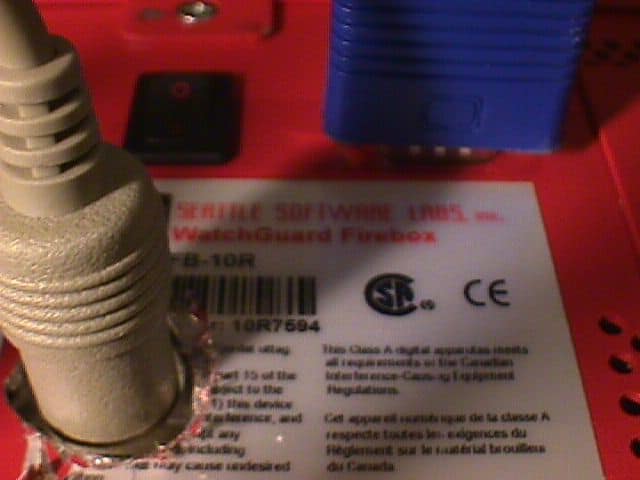